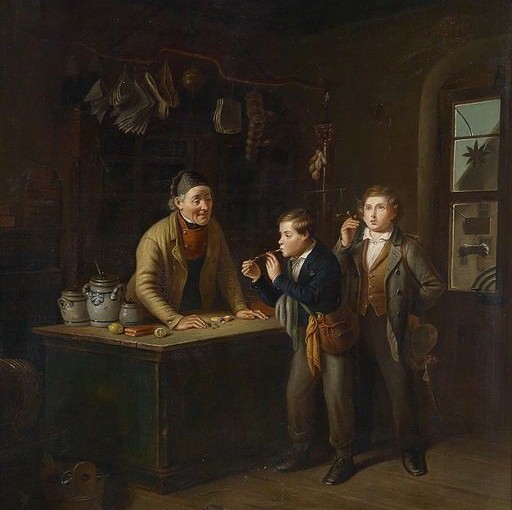 “Okay, so I figure I’ll bring a six pack of Blue Moon,” Drew says, dodging a gaggle of pre-teens.

Tom nods. “Good, though depending on the party you might want to bring two.”

“Right, right. Mina says it’ll be a laid back thing, but the effort shows, you know?”

“Yeah, so what kind of present were you thinking? Maybe a Sears portrait with Josie? You could wear matching sweaters,” Tom laughs before taking another bite of sugary pretzel.

“Stop being an asshole and help, bro. I don’t want to screw up, again.”

Tom rolls his eyes, “Okay! God! You’re such a diva! So, what does she like more than you besides beer and her cat?”

“Well, she likes dolphins and 80s cartoons. She’s an actuary-”

“The hell’s an actuary?”

“It’s…” Drew gestures vaguely, “It’s like an accountant, but not really?”

Tom chews thoughtfully. “So she likes math and taxes and shit?”

Tom laughs, “You would be into some nerdy chick who likes her crappy cat better than you.”

“Yeah, yeah,” Tom says, stuffing the rest of his pretzel into his mouth and tosses the wrapper into the overflowing mall trashcan. “Oh, one second. I want to stop here,” he says, crumbs spurting between his lips as he gestures.

Drew stands before the store. It’s an underwear store – the walls blindingly pink, and wave after wave of heavy, fruity perfume emanates from the entrance like breath.

“I don’t think this is a good idea, Tom,” he says hesitantly. “Maybe I can wait by the Cinnabon or something.”

Tom rolls his eyes. “Look, I’m just going to be a few minutes getting something for Annie, and then we can handle your stuff for Mina.” Tom tilts his head and smirks. “Though this Mina chick must really like you, since she still invited you to her party after you lost her cat. You might want to learn how to shop for this stuff.”

“He came back after a couple days! It was, like, hardly a problem!” Drew protests. Then the repercussions of what Tom says starts sinking in. “Okay, whatever, just don’t take all day.”

Stepping in, the store is both bright and dark at the same time, like Drew’s wearing glasses that use a high-contrast, high-saturation Instagram filter. The smell gets stronger, and “Since You’ve Been Gone” blares distorted through the speakers set in the ceiling.

A young woman in a tight black shirt and pants with a pink measuring tape hanging around her neck approaches them. Her contoured make-up looks contrastingly immaculate and terrifying as she walks through the light and dark areas of the store.

“Greeting the guests at two o’clock,” she says briskly into her walkie talkie before holstering it at her hip. “How can I help you two today?” Her smile is so white. Drew briefly remembers high school bio and that most primates smile as a display of aggression.

“We’re, uh, we’re not together,” he says hurriedly.

“Just browsing for now,” Tom tells her. “I’ll let you know if I need to get measured.” He winks.

Drew dies a little inside, but the (pretty?) young woman lets out a high, measured laugh and says, “Just let me know if I can help you find anything.”

She unholsters the walkie talkie again and says something in clipped tones before approaching a middle-aged woman wearing a sweater embroidered with kittens in a basket.

Drew wipes his sweaty palms on his plaid shorts and spots Tom in one of the bright corners of the store. Jewel-toned bras bulge out from the wall, the light causing rhinestones and appliqués to glitter. The matching, filmy underpants are displayed below, some have slipped off their hangers and are in an iridescent pile, like a pile of dead butterflies, but not macabre. Drew is briefly intrigued before finding a shadow to huddle in. “Dude, can we go now?”

Tom sighs. “Calm your shit, bro. We’ve been here for two minutes. You’re, like, being a cliché.”

Another store employee, also dressed in all black, pops out from behind a nearby lotion display. “Those are buy five get the sixth half-off, sir!”

“Ah!” Drew yells and defensively puts up his hands.

“You could get one in each color if you want,” the employee presses.

Drew blinks and finds that the woman has vanished. He shudders. Tom is nonplussed, but only by a price tag. “$75. Can you believe that crap? They pay someone in Indonesia, like, a quarter a day and charge us $75. I could make this for way less.”

“I don’t think you could really make a bra, Tom.”

“I painted minis for a while. I have great attention to detail,” Tom replies seriously. He sighs and starts walking towards one of the darker areas of the store. “Whatever, I could spend $75 on literally anything else. Annie doesn’t really like that stuff; hates the additional hand washing, you know?”

Drew stares at him in disbelief. “Why are we in this lady-panty store if you’re not buying anything.”

Tom starts going though a rack of neon-colored sweatpants and T-shirts with words like, “Hott,” “Kiss,” “Cheeks,” and “Giggles” emblazoned over the rear or chest respectively. “I came here for the sweats. Annie really likes them, but doesn’t like to shell out for them. Nice anniversary gift, eh?”

Drew continues to stare. “Dude, we could’ve gotten sweats anywhere. See, you could actually just get sweatpants at Walmart and screen print ‘Ass’ on the ass and it would be the same.”

Tom shrugs and flushes a little. “Yeah, I know. But if she feels sexy and comfortable in yoga class, whatever, you know?”

Tom settles on a hot pink cropped T-shirt that says, “Giggles” on the chest and a pair of electric blue low-rise sweatpants that say “Hott” on the rear. The line at the register isn’t long, but the wait is. An employee (dressed in all black) speaks constantly, telling the customers about rewards programs, coupon programs, sweepstakes, and credit cards. The older woman in the kitten sweater is in front of them; she applies for the store card, coupon program, and rewards program, but still manages to spend around $300. A skinny teen with heavy, black eyeliner is after the older woman; she declines most of the programs and says her email is 12345@hotmail.com when pressed about others. She buys a lotion gift basket with what appears to be Leda and the Swan on the packaging and requests a gift receipt. Tom holds the large, pink bag unselfconsciously as they walk out of the store and head towards the other end of the mall.

“Oh really? That must be new.”

“Yeah, yeah. So what would a nerdy, cat lady like?”

“To not be called a nerdy, cat lady?”

“Dude, no one is ever going to like your penis as much as you do. You need to come to terms with that.”

“I guess you’re right, Tom. Not even your mom likes my penis that much, and she really loves it. Like, a lot. Like, she’d sing ‘My Heart Will Go On’ to it.”

“You’re an asshole, you know that Drew?”

“Your mom wouldn’t want you to be mean to me like that.”

“Ugh, whatever. Hey, let’s get a pretzel! Those things are baller today!”