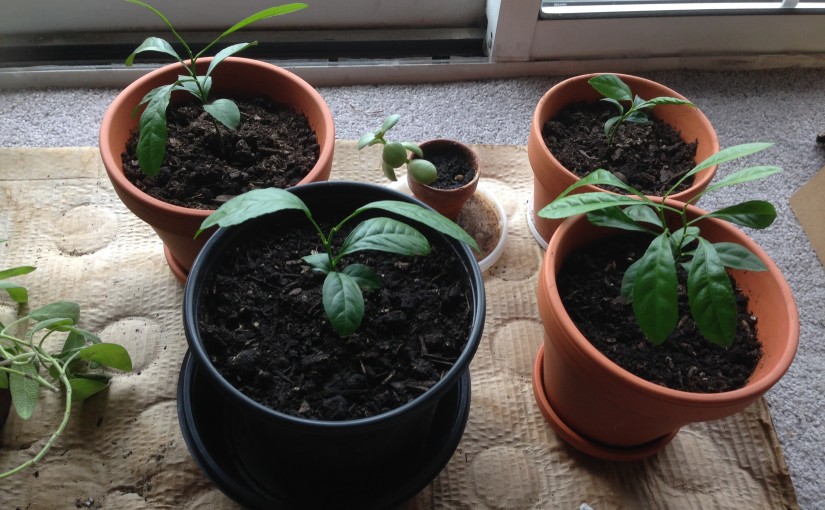 I’ve managed to give away my bumper crop of beer bottle plants in time for the pre-winter reaping, the time in which I will again cultivate more beer bottle plants. (That’s the Toxo talking.) One of them has even become set dressing at a local theater. They’re so easy to give away because there’s nearly no danger of killing them. I’m sure Balthazar is well pleased that his spawn are doing so well.

By comparison, the lemon seedlings are significantly needier. But they’ve grown so much! Their stalks and leaves have doubled in size or more, so I decided to repot them. I even bought real pots so the soil wouldn’t get gross from lack of drainage. You can see in the very first picture (which was poorly taken) that they’re huge in comparison to my last post. Diva is on the front right. She has a little bifurcated “trunk” now and continues to be the prettiest. The not-so-little-anymore surprise sprout is on the back left giving the adjacent nubbin of a jade plant a run for its money.

I also got another surprise sprout! It’s the little dude on the back left who seems to be doing very well.  Unfortunately, there’s a runt now. It’s the one on the back right. A practiced gardener or horticulturist would have probably just plucked it and thrown it out, but I’m a sap, and I’m doing my best to nurse it back to health. Both the surprise sprout and the runt have new soil and yogurt tubs with holes for drainage. I’m hoping that will have a salutary effect!

This replanting was significantly harder than last time. While the top of the plants were double to triple their previous size, the roots were probably ten times longer and seemed to cling to the bottoms of the dairy containers. There was much coaxing and delicate work simply trying not to tear the roots out of the tubs. I think they’re doing okay despite everything. All the same, the next time I repot them I may need to just shatter the pots off. By that time, I may have found new homes for some of them.

Mr. Squish reminds me that these are trees, and we cannot have nine trees in our apartment. But I don’t feel confident giving them away! They are so much more killable than the beer bottle plants! I would feel so guilty if I gave them away and they died. Mr. Squish told me that I have an operatic flair for the dramatic.

Whatever. The Toxo is telling me that it is too soon, and when the time comes for them to go forth and infect others, I’ll know.