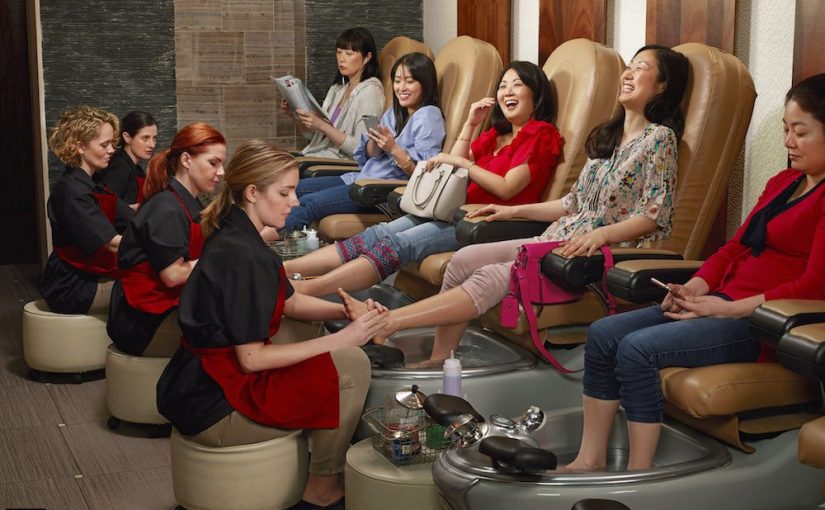 Have you guys seen those photos about race swapping everyday interactions? A lot of people have been excited about them and Oprah gave them the stamp of approval for her magazine. My initial reaction was like, “Oh, I get it.” Followed by anger.

First, allow me to first cushion the hell out of what I’m going to say. There is space for photos like these, and that they may have made a positive impact in a discussion about racism in America is great. I’m no Oprah; I don’t have that magic of being a significant social influencer for millions of people. These photos very well may be what the (fake, TV) doctor ordered.

There are things these photos do well. They portray relatively simple scenes with seemingly low-stakes in everyday situations for women and girls. I like that aspect. There should be more discussion about race relations between women and the effects of power dynamics in everyday life. That’s important stuff.

So why was I pissed? It’s complicated.

Regarding this first picture, seeing an image of a group of Asian women enjoying themselves without any performative sexiness or coy submissiveness is so rare in America that I frankly just enjoyed looking at that picture for several moments. But with the obvious race switching, it’s really more about the white women giving pedicures and the dynamic of who is working and who is relaxing in that moment. There’s something to be said about worker protection and race relations when paying someone to have intimate contact with you via massage, manicures, pedicures, and hair styling. But I don’t think this picture says it.

The message it sent to me was that there are people who need to be reminded that Asian workers in the beauty industry are human beings and the best way to do that is by pretending they’re white. Which, JFC, that’s depressing.

The impact of this photo was dulled for me because thin, white, and blonde has been considered the peak of female beauty for decades (at least). And there’s also the thrill of seeing so many Black dolls for sale. Not just one or two, but four whole shelves with five different styles. What a relief that would be for parents who just want to find a doll that looks kind of like their kid!

So why was I pissed? Because I don’t think you can take the fangs out of a situation where a little white girl doesn’t want to play with a Black doll. Moreover, it made me think of the experiment with white and Black dolls conducted by Kenneth B. Clark and Mamie Phipps Clark illustrating the effects of internalized racism and marginalization in Black children. (Be prepared to have a sad if you watch the video.)

(In more recent recreations of this experiment, the results showed more kids saying they wanted to play with the Black doll or even rejecting the either-or questions they were asked.) I would rejoice to see Black dolls so much in demand. Look, I understand how much it sucks to never find a doll that looks like you. (I saw one Asian Barbie for sale and just about cried as an adult.) But unless the viewer extrapolates about what that invisibility means and how far reaching that lack of representation is, all you have is a slightly disappointed kid.

Oooof. This picture. First, let’s talk about the rich Latina lady. She’s dressed in a short skirt and sky-high heels; she’s on her bedazzled phone ignoring the woman serving her; she has a little teacup dog. The way she’s dressed and positioned indicates that she’s kind of a Paris Hilton type: an out-of-touch, stuck-up brat. It’s worth noting, too, that viewers of ads, movies, TV shows, etc. are rarely meant to sympathize with sexy women. They’re usually a prize or a goal, or somehow shown to be morally deficient. Which, by the way, is an issue for Latina women! There’s the stereotype of Latinas being “spicy,” passionate, and sexually permissive. So, that’s one fail of this race swap.

Another thing to consider is the framing of the picture. The white woman is in the center and the other elements in the composition draw your eye to her. The photo narrative is about this nice-looking, modestly dressed, blonde maid. It’s almost a kind of Cinderella situation with the employer playing the role of ungrateful step-sister. To an extent, this makes sense for the goal of the picture. We’re supposed to consider the maid’s situation instead thinking of how amazing it is to be filthy rich.

But, I don’t know, maybe the photographer, Chris Buck, has never worked customer service? It’s not unusual for women to work jobs that consist of emotionally and physically catering to people, and pretty much everyone has benefitted from their work: hotel maids, waitresses, house and business cleaners, elder-care workers, daycare workers, and more drive the service industry, and it’s not limited to women of color either. (Though Latinas have the worst wage gap in comparison to white men: 54 cents to the dollar.) The message here is just so muddled. What is the take away? Don’t be a rich bitch? Be nice to your domestic staff? Latinas and/or maids are people, too? There are two kinds of women: rich, spoiled, and mean and poor, modest, and subservient?

It sure doesn’t say anything about working an emotionally and physically taxing job for low pay: the maid has her game face on and we’re in her employer’s immaculately clean and bright territory.

This is a quote from Chris Buck, by the way:

I personally don’t like the term privilege when it’s directed at White people. I find it a bit dehumanizing. I wouldn’t want to direct that at other people, so I don’t like that term ‘White privilege’. I think talking about race and talking about different experiences is good and certainly I’ve recognized that I’ve had some advantages while other people haven’t. I don’t want White people, including myself, to be where our voices are inherently diminished because we have less of a moral authority.

Oh boy. There’s a lot to unpack there, but I will say that the term “white privilege” is actually a soft way of explaining a racial dynamic. (See more here: http://www.huffingtonpost.com/anna-kegler/the-sugarcoated-language-of-white-fragility_b_10909350.html) Also, how the hell would I explain that I do have some white privilege? Would I be dehumanizing myself? But I digress.

I’d argue that a better race-swapping exercise is a mental one. It goes a like this.

Imagine that when a person is described as “clean-cut, all-American” your mind would jump to an image of a Black woman. Imagine that nearly all action and rom-com movies featured Black women. That everyone’s assumption that the best rock stars, best athletes, best scientists, best business people, best artists, etc. are Black women.

Now, consider what you’re feeling. If you think that this kind of world I’ve described sounds monochrome and not representative of the U.S., it is. If you think that you could make an argument that Native American women are even worse off in the U.S. than Black women, you probably could. (Though it’s not the Oppression Olympics, folks, and issues may need to be tackled differently depending upon the groups you’re talking about, even within the same ethnic group.) If you’re pissed that by virtue of gender and race the people I’ve described are considered better and more competent than everyone else, I’d say that’s warranted.