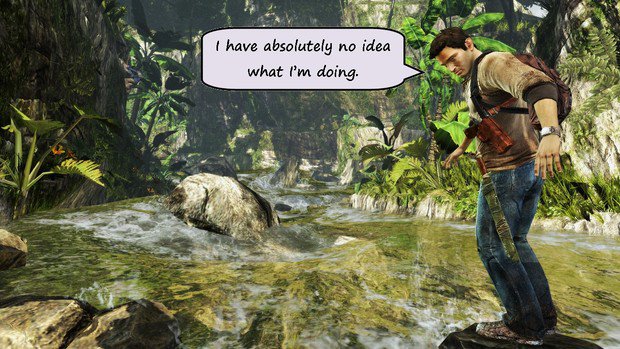 Poor, neglected blog! I was writing so much other stuff that I didn’t take time to write for you. But I did pay real money so you can exist on the Internet for at least two more years, so there’s that. [/end Aunty Mommy “apology”]

So, dear reader, you may be thinking, “What hard-hitting, incisive, thoughtful post are we going to get now? Surely, there’s so much going on in the world that you can’t not talk about it.”

Yeah, no. Look, I know I should probably get into it, but when’s the last time you’ve tried analyzing shitty things happening instead of just acknowledging them? It’s not that I don’t care; it’s that it takes a lot out of me. I was an emotional husk after doing a piece about the Global Gag Rule. I made Mr. Squish watch The Last Unicorn with me, and I cried at parts that weren’t even sad. I don’t feel like revisiting that in my free time.

But what I do have energy for is complaining about pop culture!

Mr. Squish took a friend’s suggestion to play Uncharted: Drake’s Fortune, and it immediately started pushing my annoyance buttons. Let’s take a look at the opening and beginning mission:

Okay, it kind of looks like fun, but all we know about the main character is he’s an asshole. What kind of academic is that blasé about killing people because he didn’t bother to get a permit or, for that matter, abandoning the coffin the diary was buried in? It belonged in a museum!

The plot continues with some casual misogyny instead of characterization, light racism regarding people in Lima (sexually permissive brown ladies, etc.), and a whole lot of destruction of several finds of a lifetime to look for some gold.

Here’s question. Why would we think Nate is the good guy here? He speaks with confidence, but he could be wrong about literally everything. “Oh these ruins are at least 2,000 years old!” Why the fuck would you think that, Nate? Is it a bro hunch or did you get an online certification? All we’ve seen is that he’s good a rock climbing, parkour, and killing people. He expresses almost no excitement for history unless it has to do with himself.

But this got me thinking to other would be archeology nerds in pop culture: they’re not that nerdy. They’re like 007 with glasses. Even Indiana Jones is more swashbuckling and womanizing than nerdy. Plus, he talks about stuff belonging in a museum, but have we ever seen Indiana Jones in a museum? And why does he always feel the need to remove artifacts from their home countries? Poorly done, sir.

I suppose the not-nerd archeologist is nice fantasy for people. They’re like ground pirates but legitimate because something something backstory for why they’re there. I get that it would be hard to construct a video game or movie around what archeologists actually do. They rarely shoot people, and even then they rarely shoot to kill. (Right?)

No one gets into archeology for wild adventure and pants action. I mean, you’re too busy writing grant requests, trying to get published, and living off of rice and beans. And that’s when you’ve made it. Archeologists are impoverished nerds obsessed with kind of things that Nate Drake destroys so he can smash his enemies with a chandelier or whatever.

I guess being a nerd myself, I wish there were at least one good pop representation of the tedious, yet satisfying and important work of going through an ancient civilization’s garbage to figure out who they were instead of more douchey bros that sometimes know stuff.

(Featured image from someone that agrees with me: https://www.destructoid.com/how-do-we-stop-nathan-drake–277124.phtml)