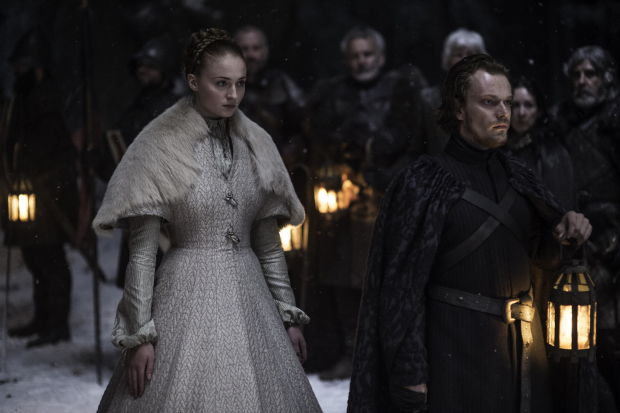 In Beowulf, the term “peace-weaver” is used to describe noblewomen who are married to an enemy clan in an attempt bring peace. The role isn’t an easy one, and a bard sings the story of Hildeburh: a peace-weaver whose husband breaks the truce and she loses her husband, brother, and son in the hostilities that inevitably break out again. Hildeburh is a tragic character pulled between strong, opposing loyalties, but she is also an exemplary one; she does her best to keep the peace and pretty much does everything as right as you can considering the situation. The use of Hildeburh’s story is more of a foreshadowing device, but I still remember being struck by what a raw deal she had.

For most of Western history, marriage was about two men formalizing a political or economic bond through use of a woman. Whether the woman was kind or pretty or intelligent didn’t really matter as long as she was related by blood to one of them and able to make blood-related babies with the other. Women were used as a way to strengthen individual families and as societal soothing device. How a woman was as a flesh-and-blood human being seemed inconsequential unless she was rebellious (in which case, tame that shrew) or very rich and influential (in which case, it’s important to get invited to her parties.) That’s not to say that there weren’t amazing women in the past, we’ve just lost most of their stories because their marriages didn’t stop or start wars.

I’d like to think times like this are long past, in a time before modern English existed or before established nation states, but the concept that it is women’s work to soothe the aggression out of violent men to maintain a peaceful society hasn’t gone away. It’s, luckily, more of a latent expectation, but I couldn’t help but notice that when angry, violent men decide to kill people, the public looks for a woman who dropped the peace-weaving ball. Some of the most obvious examples are responses that come after a man cites rejection by women as his cause for violence. (Though that’s hardly the only time it occurs.)

In the case of Elliot Rodger, there were critiques of any woman who ever rejected his advances, women in general, and his mother. (Never mind that his mother knew something was wrong and tried to get the police involved.) Granted, these comments came specifically from online communities that are hostile towards women, but more watered down versions of these comments made their way into mainstream news. He was lonely and isolated; he was spurned and bullied by the object of his affections; that’s why he became involved in these woman-hating groups. The message being sent, however subtly, is if only there was some woman, somewhere, who could’ve somehow done her bit to soothe his masculinity and prevent the violence.

This idea also holds true for George Sodini who shot several women in an aerobics class in 2009. His online journaling revealed someone who both desperately wanted a sexual relationship with a woman while loathing them. Predictably, a pick-up artist says that if only Sodini had gotten laid, no one would’ve died. Again, there’s this sense that if only some woman, somewhere, had done her bit, this man’s violent outburst would not have happened.

What is actually being asked of these hypothetical women? These would be peace-weavers?

First of all, it’s helpful to see this as a continuation of men using women as a way to establish bonds and hierarchies. What used to be valuable were a woman’s blood connections to powerful men; the new value is a type of codified female attractiveness that illustrates a man’s masculinity or power. It’s no coincidence that Rodger targeted “the hottest sorority house” or that Sodini wrote “…30 million women rejected me – over an 18 or 25-year period. That is how I see it. Thirty million is my rough guesstimate of how many desirable single women there are.” Despite the people who said that these murderers just needed to get laid, it’s not like any woman would do. She would have to be considered sufficiently attractive to other men to illustrate the how masculine her partner is. If you’re not nauseated yet, you can see a good example of this with this dude’s 10 point rating scale and how often he mentions his friends’ opinions instead of his own desire: http://www.ign.com/boards/threads/official-guide-to-rating-a-girl-10-with-pics-test-at-the-end.452665169/

Wow, this is getting really depressing. Kitten break!

The next expectation of these would be peace-weavers beyond a specific type of attractiveness, is sexual availability. It’s assumed that this is the action that will soothe the violent desires. There’s not a lot of room for this hypothetical woman’s desires or her own expectations from a relationship. Apparently, it’s like she administers morphine with her crotch, and magically, these guys egos will be soothed, their violent tendencies will wane, they will find the companionship they needed, and the rest of society can keep on going without worrying about them.

Well, peace-weaving didn’t work out so well for women way back when, and it certainly wouldn’t work out well now. Consider that nearly 75% of all murder-suicides involve an intimate parter. That statistic doesn’t even include people who are abused or injured by an intimate partner. What is being asked of would-be peace-weavers is similar to the Danish noblewomen or yore: to suffer stoically and quietly so the rest of society needn’t worry.

Luckily, we don’t isolate attractive women in stables to handout to would-be murders. Luckily, for all the people who say some hypothetical woman should’ve just slept with these guys, there are other people who say not dating someone who has obvious problems with women is a good and understandable choice.

While the cases I cite would be considered old news, the mindset with which we approach these violent outbursts haven’t changed. Often, we’re presented with the idea that there are actions individuals can take that can somehow change systematic problems. It’s actually a comforting thought: If I’m kind enough, if I’m open enough, if I try enough, this won’t happen again. It’s even better if you’re exempt, and someone else, someone single and attractive, could’ve done something – hell, was responsible for keeping the peace. The thing is, even though individual action can be helpful, it can’t stop every mass murderer out to kill their family and strangers. We will not be able to find a way mitigate mass shootings until we stop trying to find the failed peace-weavers and try to find systematic solutions. After all, Hildeburh did everything right, and it still wasn’t enough.