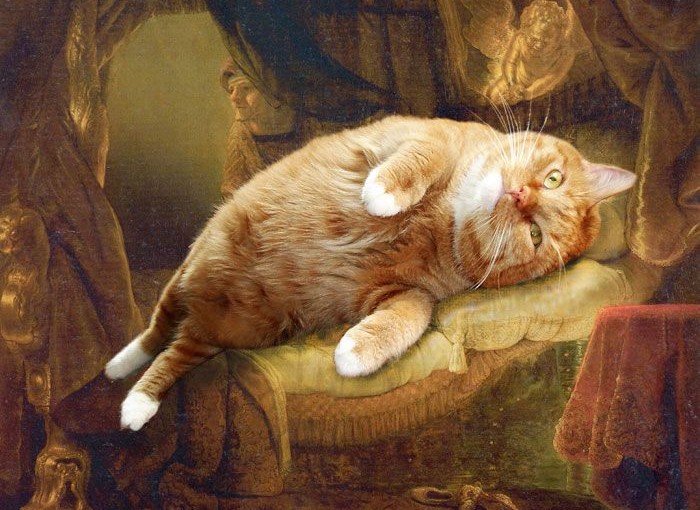 “Hey, Drew,” Mina says, “is everything okay? Did my package arrive?”

“Uh, yeah. Not yet. I was just, you know, checking up with you. I wanted to make sure everything was okay with you.”

Her sigh crackles over the phone connection. “Well, you know how these things are. Hurry up and wait! The surgery went pretty well, so we’re just waiting to see how Dad recovers.” Her pause stretches out over several seconds. “Thanks for checking in, I guess.”

“Hehe, well, I was just, you know, being neighborly! Lookin’ out for you!” Drew tries to swallow, but his mouth is dry.

“Sure, yeah. Bye now!” Drew hangs up and looks at the blank screen of his phone. “I lost your fucking cat.”

“He’s probably dead. You know that, right?” Tom sits flipping through one of Mina’s Vogue magazines, his feet up on the spotless glass coffee table. “You said Josie was sixteen.”

“Did you check under the bed? That’s where you find dead cats.”

“No, listen. Do you wanna know what he did yesterday? He took this awful dump right next to the box and stared at me the whole time. He’s just being a cockblock because he doesn’t like me.”

“Maybe he’s pissed ‘cause his name is Josie,” Tom says with a shrug. “I’d be pissed if I was a dude named Josie.”

“Mina named him when she was a kid, after Josie and the Pussycats or something. Name stuck after she found out he was a dude. Anyway, he’d be an asshole even if she named him Gandhi or some shit.”

Tom plops his feet down on the floor, shaking his head. “You blew this, bro. Never watch the dying pets of hot chicks.”

Tom shakes his head again, lifting his hands as if asking for mercy, but he gets off of the white sofa dusted with orange cat hair. He meanders into Mina’s bedroom and looks under the bed, exposing the band of his neon boxer shorts as he crouches down.

“I guess he died somewhere else.”

Drew isn’t looking at Tom. He’s looking at Mina’s purple paisley bedspread. A vibrant blob of cat sick held together with mats of hair sits in the middle of it. He points at the mess. “See what I mean! It’s been like this all week. He just goes out of his way. He really makes a statement.”

Tom stands next to Drew and looks at the hairball thoughtfully. “How long has it been here?”

“I don’t know. I’m not some kind of creeper who’s always going into her bedroom while she’s out.”

“If it’s warm, Mr. Josie the Pussycat is nearby and in the land of the living.”

“That’s very clever, Tom. I think, as the one who had this great idea, you should do it.”

Tom arches an eyebrow at him. “I’m not the one who’s single.”

Drew glares at him, then glares at mess on the bedspread.  Josie’s probably hiding somewhere in this room, laughing a hacking, old-gross-cat laugh while we talk about touching his barf.

“Ugh. Fine. I’ll do it, you baby.” Tom gingerly prods the mess, then shrugs.

“Are you gonna clean that up?”

They go through the rest of the house with no success. Tom checks under all the furniture and even looks behind the stove and refrigerator, but fails to find a corpse. He finds dust bunnies, several hair ties, one dangly dolphin earring, 37 cents, 6 bits of cat kibble, and at least one full cup of rolled oats. Drew checks all the closets and small, cozy rooms, including the pantry and laundry room. He finds Mina’s flashy going out clothes – short, sequined, and brightly colored – and he finds her faded Rainbow Brite pajamas. He doesn’t find the cat though. The only trace of Josie are the clumps of orange hair skittering over the hardwood floors and the desiccated turds in his litter box.

After an hour, they place a can of tuna on the front step and open some craft beers that Mina had labelled with a note reading, “Thanks for your help!”

“This Mina girl seems alright,” Tom says, drinking a beer while going through her mail on the kitchen counter. “She gives to charities and shit.”

“Yeah, she’s awesome,” Drew says quietly, then drains the rest of his beer.

Drew starts on his third beer when the doorbell rings. Taking the bottle with him, he opens the front door to find a UPS guy carrying a huge package; the picture on the outside looks like some kind of cat jungle gym. The cat in the picture looks disdainfully at the people manically smiling next to it.

“Yeah, bro. I’m watching the house while Mina is gone,” Drew says leaning against the doorframe. Whatcha gonna do about it? He sizes up the UPS guy. Dude’s a bit older and his forehead’s going after his hairline, but he obviously doesn’t skip leg day. Maybe that’s why all these delivery guys wear those shorts. Though apparently calf implants are a thing now?

“Oookay, well if you could sign here,” the UPS guy says after a pause. Drew signs the screen on the package scanner with a flourish. He normally just prints his name, but it’s not like Mr. UPS Big Calves knows that. “Thanks. This thing is top heavy, so careful how you carry it,” the UPS guy says warily.

Pffft. No problem, I’ll just – Oh, crap. Yeah, that’s really awkward. Drew tries to handle the package while holding his beer, feeling it slip to one side. “Hey, Tom!” Drew calls into the house. “Come help me with this thing.”

The UPS guy grabs onto the package again, barking, “Careful, there!” while Drew tries to jerk it away despite his shaky grip on it.

An orange streak flies out the door between Drew’s legs, past the open can of tuna, and into the growing twilight.

(For more fat cat art as seen in the featured image, go to http://fatcatart.com/?lang=en!)