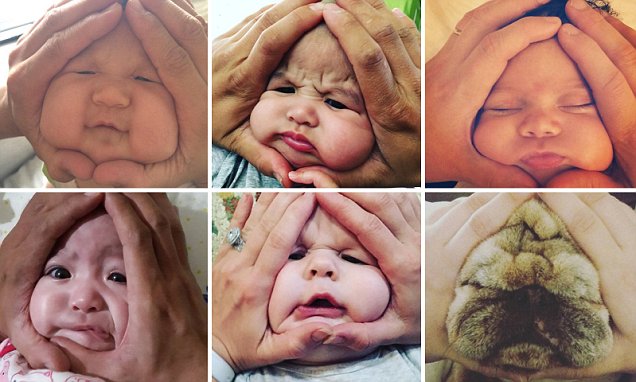 My mother told me that she didn’t care if I ever give her grandchildren in much the same way she told me that I didn’t have to become a doctor: sincerely with an undercurrent of disappointment. I remember the home movies she took of my tantrums, all snot and rage and throwing shoes out of the shoe rank. Watching the old VHS tapes with images of my fits popping up between piano recitals and birthday parties, I knew that if I ever had a child I’d be cursed with one like myself.

And yet, I keep finding reasons to have children.

– I like my face and I like Mr. Squish’s face. If we were to make child, there is at least a 70% chance that I would also like their face.

– I would do all the things my parents didn’t with my tiny human: have awkward conversations about sex, expose them to pop culture, and go camping (potentially without me.)

– My mother-in-law would be well-pleased with the squalling babe I would beget. Like a concubine who births a son, I would forever be in her good graces, even if I never manage to host a holiday or email vacation pictures in a timely way.

– Part of the reason why I went through all the hassle of changing my name upon marrying was in case we had a child we would all have the same last name. It seems like a waste of effort if I don’t create another person to look after for the rest of my life.

– I have not ovulated for nearly a decade and kind of miss it.

– A tarot card reader once told me that I could “get knocked-up through a pair of snow pants.” Like a Ferrari kept in a garage, it’s shameful not take this extreme fecundity out for a spin.

– It seems cosmically unfair for genes that survived Genghis Khan, the Black Death, the Potato Famine, and both World Wars to die out because of my whims.

– There are other tiny humans in my extended family who could pick up a still tinier human I would produce. It would be adorable, like when dogs walk each other.

– There is a small possibility that the life form drawn from my womb would embody the best parts of me and Mr. Squish instead of becoming a living mosaic of our most annoying traits.

– Unlike houseplants, children, especially as depicted in YA fiction, are clever and resourceful. I can’t screw up that badly.

– In the case that I do screw up, my sister-in-law is a wonderful mother. She could take the child, and I could visit like a glamorous but distant aunt. The child would say things to her like, “When is Auntie Mommy coming? In a fortnight?”

– When I say I’m tired, other people who are parents would nod knowingly and with compassion instead of telling me I don’t know the half of it.

– There are no doctors in the family and, by god, my mother deserves a second chance to brag to Auntie Mei-fei about something.